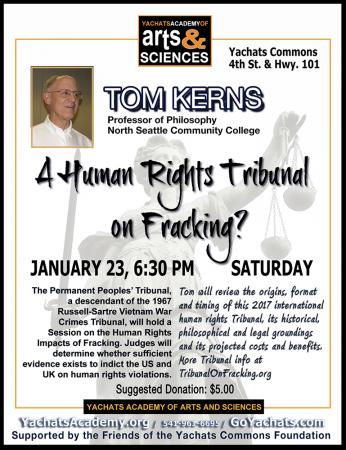 A Human Rights Tribunal on Fracking?

For more information about the Tribunal see:  TribunalOnFracking.org

The Permanent Peoples' Tribunal, a descendant of the 1967 Bertrand Russell / Jean-Paul Sartre Vietnam War Crimes Tribunal, has scheduled a Session on the Human Rights Impacts of Fracking and other extreme methods of fossil fuel extraction. The Tribunal's panel of judges will be asked to determine whether sufficient evidence exists to indict the United States and the United Kingdom on human rights violations related to the permitting of fracking operations within their jurisdictions. Prosecutors will argue there is sufficient evidence; defense attorneys will argue there is not.

The Tribunal is scheduled for October of 2017 with a week of hearings in the US and another in the UK. The PPT's panel of human rights judges will hear legal arguments and evidence from expert and personal testimony, will deliberate and in time issue findings.

In the months leading up to the 2017 plenary hearings, communities impacted by fracking or the threat of fracking are invited to hold preliminary mini-tribunals and mini-hearings to collect evidence and arguments that can later be presented at the plenary hearings.

Kathleen Dean Moore, in her Truthout article on the Tribunal, explains Why This Tribunal Matters.

In this lecture Dr Kerns will review the genesis, purposes, format and timing of the Tribunal, its historical, philosophical and legal groundings and its projected costs and benefits.

For more information about the Tribunal visit:  TribunalOnFracking.org