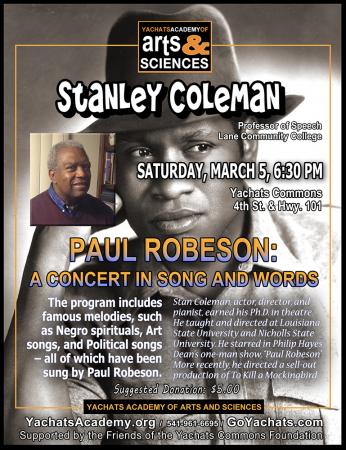 Stanley Coleman's Paul Robeson: A Concert in Song and Words

Dr. Coleman, a Eugene resident, is an artist, pianist, singer, producer and a  multi-talented person. He just finished directing a month-long run of "To Kill a Mocking Bird at the Eugene Very Little Theater. Dr. Coleman earned his PhD. in theater from Louisiana State University and is currently an adjunct professor of speech at Lane Community College.

Paul Roberson was a man of extraordinary versatility and achieved distinction in the 1930s and 40s as both a scholar and an athlete before he became an internationally honored concert artist and a stage and screen actor on the London stage, in Broadway plays and in Hollywood movies.

As an athlete and scholar, he received 15 varsity sports letters and was valedictorian of his class at Rutgers University. He played professional football, earned a law degree from Columbia Law School and performed in 25 different languages at sold-out concerts worldwide.

His life took a darker turn in the late 40s when he repeatedly spoke out and sang against racial injustice and defended the Soviet Union (at the height of the Cod War). As a result, he was virtually eliminated from the entertainment industry. His passport was revoked, his concerts were cancelled and his dazzling career was shattered. Only toward the end of his life did he resume public appearances and his fame began to revive. He died in 1976.

For more information about Stanley Colman's work, please see the Feb 16, 2016 story in the Eugene Register-Guard, "Embracing a new stage: Stanley Coleman brings a lifetime of experience to the local theater community," by Randi Bjornstad.