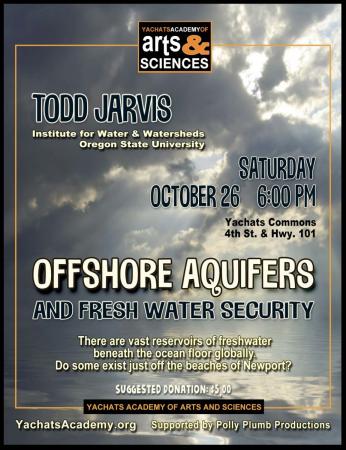 There are vast reservoirs of fresh water beneath the ocean floor globally, but are any available just off the beaches of Newport? Dr Todd Jarvis, a hydrogeologist at Oregon State University, believes that offshore aquifers could exist with the potential to provide long-term water security for all of the communities on the Central Oregon Coast. Exploratory offshore drilling along the Oregon coast in the 1960s found no oil, but the seven exploratory wells did encounter rocks that appear remarkably similar to the onshore aquivers already tapped by Oregonians, suggesting that they extend beneath the continental shelf. The drilling data, borehole logs, and geophysical logs of the exploratory wells are archived by the State of Oregon.

1) reevaluating the drilling data to map target areas for determining the size of these subsea aquifers;

3) generating enough regional interest to begin the search for funding.

While two other offshore groundwater studies are underway off the east coast of the US and in the Mediterranean Sea near Malta, a single well, located offshore Oregon, would be the first to specifically target drinking water supplies, potentially providing a model for other coastal areas in the US and globally that are facing water shortages.

The potential benefits of accessing this water are manifold. For Oregon, it would allow many miles of coastal rivers to be restored to full flows during the period of lowest flows and highest demand, providing greatly enhanced conditions for returning salmonids. The subsea aquifers could also be artificially recharged with treated winter flows, allowing them to return to full storage capacity and perhaps make water available for sale to neighboring communities experiencing shortages. It could be a less expensive alternative to building more dams. But, most importantly for the Oregon coast, offshore aquifers would provide the highest degree of resilience to damage from earthquakes and resulting tsumanis, allowing for a greatly expedited recovery.