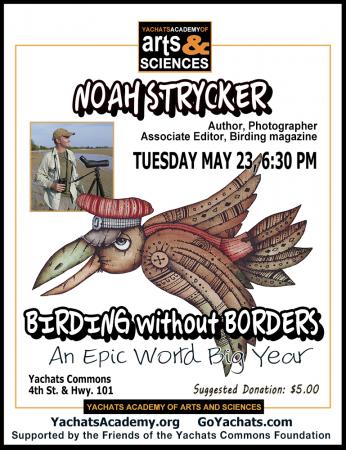 Birding Without Borders: An Epic World Big Year
In 2015, bird nerd Noah Strycker of Oregon became the first human to see more than half of the planet’s bird species in a single, year-long, round-the-world birding trip. Anything could have happened, and a lot did. He was scourged by blood-sucking leeches, suffered fevers and sleep deprivation, survived airline snafus and car breakdowns and mudslides and torrential floods, skirted war zones, and had the time of his life. Birding on seven continents and carrying only a pack on his back, Strycker enlisted the enthusiastic support of local birders to tick more than 6,000 species, including Adelie Penguins in Antarctica, a Harpy Eagle in Brazil, a Spoon-billed Sandpiper in Thailand, and a Green-breasted Pitta in Uganda. He shared the adventure in real time on his daily blog (audubon.org/noah), and now he reveals the inside story. This humorous and inspiring presentation about Strycker’s epic World Big Year will leave you with a new appreciation for the birds and birders of the world.